I'm looking for a set of Z-Wave (preferably Z-Wave Plus) components to use in order to merge two 2-way light switch circuits and allow control of both lights from all switch positions. I've looked at Fibaro FGD-212 modules but I don't think they'll meet my needs.

I'll give as much detail below as I can about my current setup and what I've investigated.

This is for UK home wiring, in case that matters.

My lounge and stairs leading from it have one ceiling light each and both have two switches (making 4 distinct switches in total, no correlation in placement).

I've also been investing (slowly) in Z-Wave equipment, and have started to design a replacement for the switches which would allow:

My initial hope was to use 3 * double switches and a single switch, wire them up and control it all with code, but that was before I learnt how 2-way circuits work.

3-core (plus ground) 2-way light switch circuits for both the stairs/hallway and lounge: 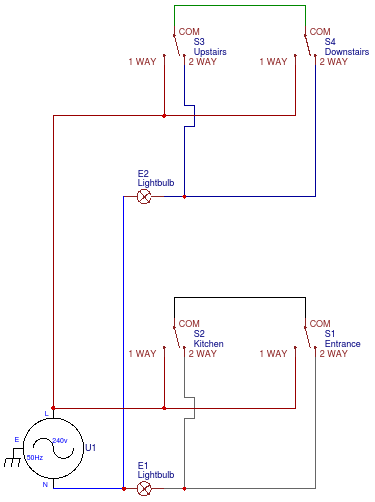 I stumbled upon a guide to using Fibaro Dimmer 2 modules to achieve this, which would change the circuit to the following: 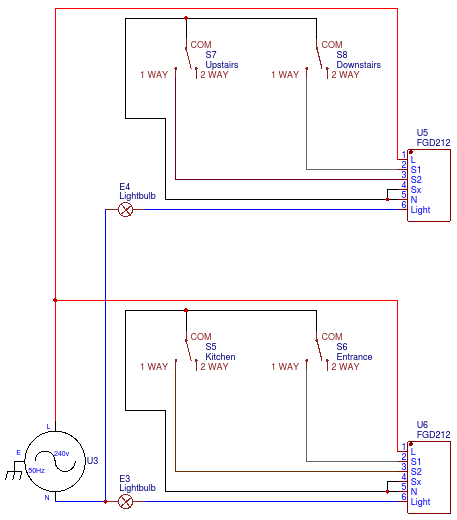 I can see how the wiring and module would work, but my issues with using the module are:

Is there a combination of z-wave switches which will enable 2-way switches? It must be a common problem.

You've explicitly rejected the factory recommended way to configure the circuit, which is to have only one switch controlling the load, and using remote-only signalling switches for the others. And you're doing this on the supposition that someday one of the switches will fail; but you've only said that it would leave a switch "useless", without saying why you wouldn't replace the failed switch. I would advise you to reject this plan.

Having two points of electrical load control are going to leave you with a mess that will require extensive special configuration of the system, and goes against the design philosophy of automation installation, which is to have a single point of load control but as many decoupled user interfaces as you want.

For 3-way or n-way control, there are several choices. Some companies sell a 3-way kit including a hard-wired "load controlling switch", and a hard-wired "remote signalling switch". These are intended for easy direct replacement of existing 3-wire switch systems; wire the circuit using the documents that come with the switch. As a bonus, the remote switches are much cheaper than the full Z-wave switches, so the pair costs much less than two full Z-Wave switches.

Z-Wave automation gives you other options: use a regular Z-Wave switch as the load controller, and add Z-Wave remote switches (aka "single scene controllers") as needed. You can even purchase battery-operated wall-mount Z-Wave switches, if you don't want to run electric power wires to all the desired switch locations. One set of batteries will last several years.

If you decide to go the Fibaro route, consider installing the Fibaro module inside the light fixture's electrical box instead of the switch box. Most light fixture boxes have a bit of room to spare. That can preserve space in a crowded switch box.

Also, be careful with the dimmer switch purchase, especially with CFLs. Some dimmers are designed to work with CFLs and/or LED light bulbs, but many are designed only to work with incandescent bulbs. It may also be time to consider swapping out the CFLs for LEDs, but buy the right kind of "dimmable LEDs" - some are designed only for non-electronic dimmer switches! So be sure to pair the correct switch with the bulb technology you plan to use - the wrong dimmer will quickly destroy a CFL. The marketplace is quite a mess right now.

If all else fails you can use an "appliance switch" to control the CFLs, which uses a mechanical relay to operate the circuit. But they are not dimmable, they are not as cheap as dimmer switches, they may not respond to an "All lights on" broadcast signal, and they may not be available with a cheap external 3-way remote signalling switch.

( And if you're still wanting to set foot on the "let's make it complex because it might fail" path, then you owe it to yourself to run all the numbers. What is the MTTF and/or failure rate of the switches you're planning to buy? What losses will you incur from a failed switch? Will you have an inaccessible room? Is it controlling a single safety critical light, with no windows or alternative lighting possible in the area? How much will it cost to replace? What kind of Service Level Agreement are the users willing to tolerate? What kind of SLA can you afford?

In-line dimmers have to be dimmers rather than switches because they have no neutral return at the switch. This makes any multi-way arrangement nigh impossible.

The 'obvious' homebrew solution is a z-wave relay, and a unit to aggregate 'switch' requests into a control toggle. Probably requires an mcu or SBC to facilitate this, and this would extend to more than 2-way switching. Using a transmit only faceplace, Rx and Tx on your SBC, and Rx at some convenient point in the electrical circuit.

Without the Z-wave requirement, you could pair a dimmer switch with a wire free control. Wire free means there is no requirement to replicate the standard 4 wire, 2 way switch arrangement. All switches have an equal input on the lamp.

Not the answer you're looking for? Browse other questions tagged smart-home hardware zwave ac-power lighting or ask your own question.

18
Is it better to control smart lights or smart light switches/fixtures?
7
UK-compatible (240VAC) receiver/controller for ceiling fan with dimmable lights
6
What's the Name for a load control switch that is hidden in the ceiling?
8
Smart fluorescent strip lights
8
Controlling WiFi switches from physical switch
5
How can I use Raspberry Pi to communicate with my Z-Wave gateway?
3
2-Way Switching with Alexa - how to get Alexa to toggle the switch regardless of it's state