I have an IoT project I'm working on where each device must be independently connected to each users phone and not connected to any central WiFi network. So please keep in mind that this IoT board does NOT have any internet connection in and of itself.

To solve this, I've found a few hacks where (if I set the DHCP to Static, the DNS and router to blank) that (at least for iOS) allow me to connect to the device over WiFi, and send and receive data to the board over this protocol, while remaining connected to a 4G/LTE signal

So far so good.

I've installed NGINX and am running a web server that hosts a captive web portal/web app to control functions and send commands, as well as receive the resulting data. Again, so far so good. At this point, I'm able to connect to the board over WiFi, have a captive portal appear, send and receive content.

However here's where it gets sticky. As the client smartphone is connected to the device over WiFi and to the wider internet over 4G - the goal is to allow these simultaneous connections to allow both local content on the IOT board (fed locally over Wi-Fi) and external content hosted on remote servers (fed over 4G) to be rendered on a single DOM.

Basically what I'm trying to do is this: 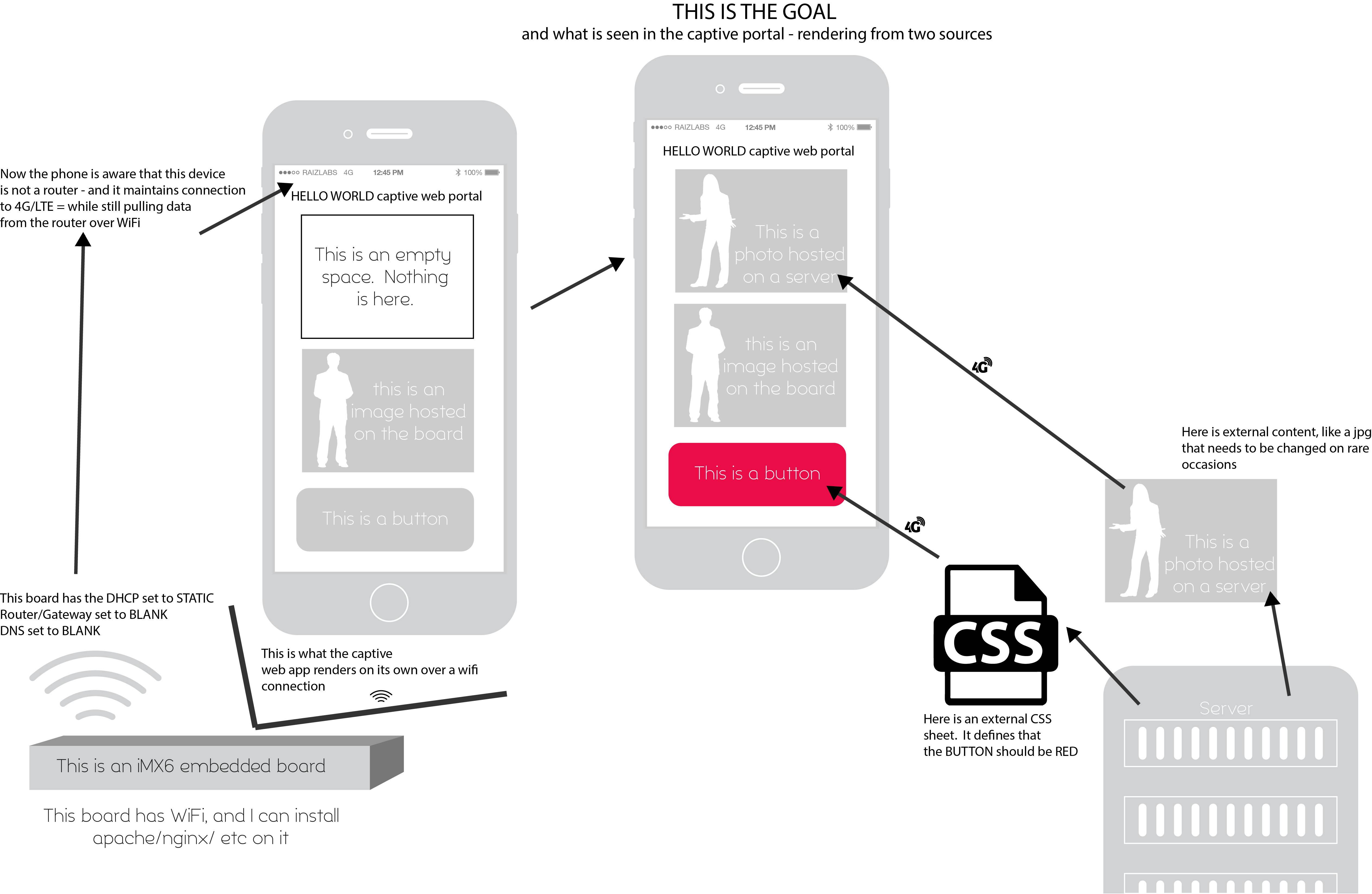 I'm planning a few ways to tackle this problem in the upcoming week - and the most promising I can think of is to use an NGINX reverse proxy to host content on the captive portal from two locations.

Question 1.) Does anyone feel that I'm on the right path to solving this problem through setting all the resources to relative:

have proxy rules that do:

However my understanding of reverse proxies is that the embedded board needs to have its own internet connection in order to do this?

Question 2.) Are there any other ideas that anyone can think of to solve this - even crazy ideas like XSS vectors to PUSH content into the captive portal from external servers?

Question 3.) My hack of setting DHCP to Static and DNS and Router to Blank only allows for simultaneous Wi-Fi & 4G connections on iOS... not Android. Any ideas of how to do this on Android too? Wi-Fi Direct maybe?

Question 2.) Are there any other ideas that anyone can think of to solve this - even crazy ideas like XSS vectors to PUSH content into the captive portal from external servers?

If I may suggest, you consider using the AllJoyn framework?

Looking at your problem statement, you may leverage AllJoyn in following manner:

Not the answer you're looking for? Browse other questions tagged hardware wifi wireless web-services linux or ask your own question.

9
Connecting web app to IoT AWS
3
Recommendation to choose API development open source Language, Framework and Database
7
Cheap PoE board with TCP/IP support
6
Could not ping ESP8266 Wifi module connected to an Arduino
4
WLAN Hotspot Internet sharing possibilities?
16
What is a good way for an IoT device to receive its network settings?
1
How many local IoT, MQTT devices on a single WiFi router?
1
Problem with UART of Fona 3G from adafruit. (aka SIM5320a)
0
Mobile device connected to custom WiFi IoT network drop connections