A smart home contains both IP and non-IP devices (figure). 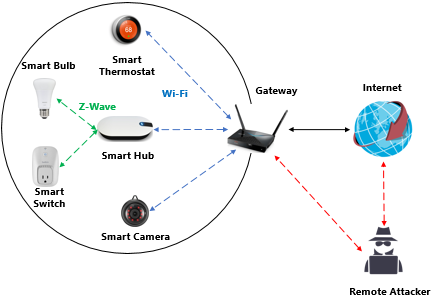 Does a smart hub have an IP address ?

Port forwarding is a technique for allowing IP devices residing on private networks to be reached from the public internet, using NAT. Since those devices are not on an IP network, this does not apply to them. They will be controlled through the hub.

Has the Mirai attack (in 2016) infected only IP devices or also non IP devices.

There's some pretty good information out there about what devices were targeted. The targets were mostly Linux-based IoT devices that were publicly exposed and had default credentials. Mirai targeted only IP connected devices; other devices were unaffected.

Not the answer you're looking for? Browse other questions tagged smart-home security or ask your own question.

7
What can I do if a smart DVR camera only supports default passwords?
8
Will changing my user name and password block Mirai attacks?
2
Which virus infected IoT devices in a university and brought down their network by sending requests to seafood websites?
16
How do I avoid port forwarding when exposing IoT devices to the external Internet?
15
How do consumer IoT devices typically enable Internet connection?
6
Techniques of remote access to non IP IoT devices
6
How does URL Remote Access method work?
2
How is remote control of IoT devices Implemented by SmartThings?
7
Are there 6LoWPAN based smart home platforms?
2
How Smart Home devices communication works