How can I programmatically tell a camera where to point?

I don't have a particular camera in mind right now, I'm just curious how this is done, programmatically/mathematically.

I have a 3D space, a rectangle, with a camera up in one corner looking inwards.
I have a moving object in that rectangle that's transmitting (x, y, z) coordinates of its current position.
I want to take those coordinates and translate them into instructions telling the camera to point at that position.
How is this translation typically done?

My camera is a DLink 5020-L and has pan/tilt commands which can be given through an API. It also has predefined positions to set and can also be triggered through API

(I'll add some schematics when I have time)

Great answers already, I'd just like to add a few other things that you should take into consideration. Like hardlib and Goufalite have already mentioned, the way to do this is trigonometrically. I've drawn out a 2-d depiction of the camera and the IoT object: 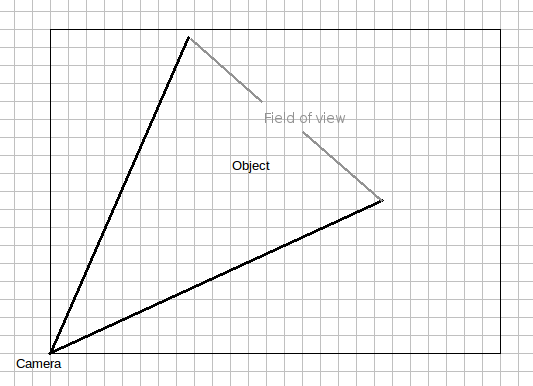 As you can see, the camera's field of view is going to be larger than the object - if not in close range, when the object moves further away.

Now, you may want the camera always centred on the object. In that case, you can simply take the calculations that hardlib referenced:

...which will be the angle counterclockwise from the x-axis, per convention. You'll also need the angle away from level:

Obviously, you'll have to calculate based off of the camera position being at the origin in all three axes.

This is normally done with basic trigonometry.

Start by working on a single 2d flat plane with the camera at the origin (0,0) and the object at (x,y)

so the pan angle can be found with

You can also work out the straight line distance (the hypotenuses) between the camera and the object with:

Now you can use the h distance with the z height to calculate the tilt angle in the same way.

Once you have the angles you can feed these to what ever is controlling the pan/tilt on the camera.

Not the answer you're looking for? Browse other questions tagged tracking-devices surveillance-cameras or ask your own question.

0
Can I connect to surveillance camera remotely without direct access?
1
How to stop Amcrest camera from tracking motion while Surveillance Station is in Home Mode