Detecting static human? How? Which Sensor?

I am new to this community and I apologize for my bad English. I am interested in

I am working on my new project. Where the requirement is to use a sensor for

I did some research on PIR sensors but PIR doesn't work in the case of a static human (not in motion). So please suggest a suitable sensor for static human detection. I have attached an image of the bathroom in the project. 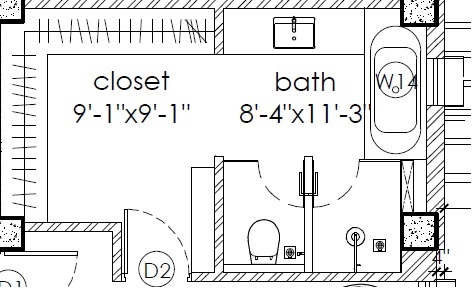 Detecting presence (rather than movement) can be a challenge. There are many ways of doing, each with pros and cons.

So, as you can see, there are no obvious solutions. I think in this specific case I would still go for a PIR sensor (or several, actually), with a pretty long timeout (at the very least 5 minutes, probably even 10 or 15). They're cheap, they can run on battery, they can be quite sensitive.

Make sure you understand how they work (they detect movement in a plane orthogonal to the axis only, and many of them only/mostly in a single direction). The more surfaces there are on the Fresnel-like lens the better (each is a detection area). The closer the sensor to the movement the better.

I would probably place sensors over the sink, over the bathtub, over the shower, and over the toilet. Make sure they are suitable for use near water, humidity and heat.

One alternative could be to combine multiple types of sensors.

I somehow forgot that PIR sensors also have issues with high temperatures such as those of a hot bath, so they’re probably not the best option in the area of the bathtub and possibly the shower. Maybe a Doppler radar may be an option there. You probably need to combine multiple technologies to achieve the best result.

Not the answer you're looking for? Browse other questions tagged smart-home sensors or ask your own question.

15
Using LP Gas Sensor in a Smart Home Safety System
7
How to calculate frequency with the voltage received from a vibration sensor?
7
Which UK smart energy meters can be used as IoT sensors?
5
Some type of movement sensor
12
Is it possible to use a CO2 sensor to detect how many people are in a room?
2
Dumb sensor vs smart sensor