KNX is a standardized, OSI-based network communications protocol for building automation. It is the successor to, and convergence of, 3 previous standards: EHS, BatiBUS and EIB.

Until recently, KNX did not have support for support for TCP. While there has been an IP based implementation of KNX named KNXNet for quite a while now, this protocol uses UDP as the transport layer, which is not very programmer-friendly and rather poorly supported in comparison with TCP.

Only recently did the KNX Association release a KNX Standard extension for KNX web services. This means that there is now an official standard for implementing RESTful web services, which makes it far easier to integrate the KNX eco-system with other technology: 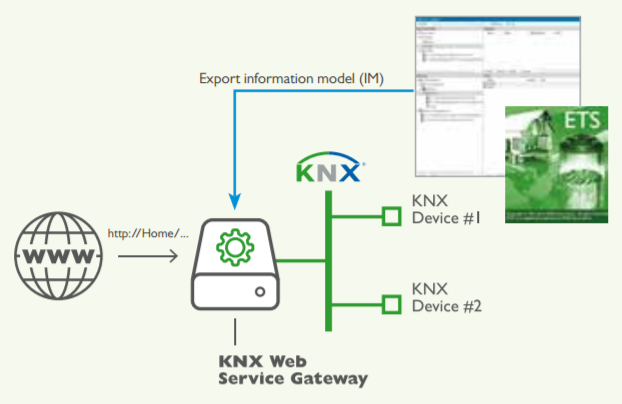 The KNX WS specification foresees three flavors to ease the integration with an existing ecosystem: oBIX, BACnet/WS and OPC/UA.

I'm currently having a basic KNX home automation installed in my home by a certified installer. I would like to purchase such a gateway to implement a custom web + mobile UI for my home, but I've been informed by both my installer and the KNX Association that no commercial solutions are on the market that support the new web services extention out of the box... yet (*). Neither seems to have any idea whatsoever when such a gateway might become available on the market.

Unfortunately, this kind of information is very, very hard to find anywhere online.

(*) Note : While there are a whole bunch of commercial KNX/IP gateways, but none of these the brand new KNX WS standard, which has been released just a few months ago. The gateways currently on the market either only support KNXNet or some proprietary TCP-based protocol, neither of which are what I'm looking for!

You could have a look at Loxone - they have integration into KNX and they also support RESTful automation.

Besides that you could probably have a look at devices like recently announced Gira X1 or any KNX/IP gateway - many vendors provide some kind of interfaces. For instance, have a look at VisuControl from MDT.

I haven't found any complete products. However, you can download a complete software image for the Raspberry Pi of the KNX Web Service at KNX.org. It's free. The registration can be done with bogus information and 10 minute mail. Figuring out that the password has to be numbers only wasted some time though.

Anyways, after downloading that info package the zip contains a link to a 3.8 GB Raspberry image and a complete web service specification. Even without a Raspberry that image should be quite easily adapted to any other Linux system. Thus, you'd have a software KNX Web Service gateway with a service description.

Apparently since this is from October that's the best that's out there currently.

I can not find any trace on the net of use of KNX web service which is proposed to natively manage the XML through ETS5 between the installation KNX is the Raspberry.

I followed the webinar ETS in June 2017, but no trace of use to date.

Not the answer you're looking for? Browse other questions tagged smart-home standards hardware web-services knx or ask your own question.

13
European Union Regulations for Smart Plugs
11
Is there a certificate to indicate the security level of IoT devices?
20
Are there any initiatives to prevent IoT obsolescence?
8
UK-compatible (240VAC) receiver/controller for ceiling fan with dimmable lights
16
What IoT services are available for storing/sending/publishing generic data in the cloud?
20
Cheap IoT microcontroller with PoE
6
Looking for a relay that can be controlled from .net web application (via TCP/IP)
10
Standards for non-Internet-connected WiFi devices?
7
Are there 6LoWPAN based smart home platforms?