I have a 3-speed ceiling fan with integrated dimmable lights which when installed prior to my owning the house was fitted with an infrared wireless receiver.

For a long time the remote did not work (poor quality construction) and after repairing it and having a few months of use have since found the receiver now isn't working (I've tried all the jumper combinations).

So I now seek to replace the wireless receiver with one that supports a home automation system rather than just another infrared like-for-like replacement. My existing remote control looks like this: 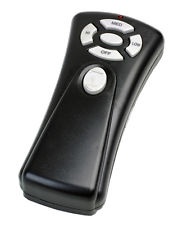 Has anyone come across a home-automation system with wireless receiver (ideally compatible with at least one of the major brand solutions such as Z-wave, ZigBee, LightwaveRF, Smartwares etc, but honestly I'd consider anything) for a 3-speed ceiling fan with integrated dimmable lights?

I've seen an Insteon Ceiling Fan and Light Controller module available for U.S. ceiling fans running on 120V AC but they don't seem to have a product for 240V AC as required for UK models.

I've also seen a Qubino Flush Dimmer which could control the dimmable lights and their website says a second unit of the same would also be suitable for controlling the fan but I'm not certain of this aspect since it is a 3-speed fan (i.e. off, slow, medium, fast), not just variable speed (I can't set it to 62% speed for example).

What I don't know however is whether this 3-speed setup is a limitation of the current wireless infra-red receiver/controller or of the fan unit itself, and this is where I find myself a bit out of my depth. The ceiling fan unit looks similar to this, except with no pull-cords for operation: 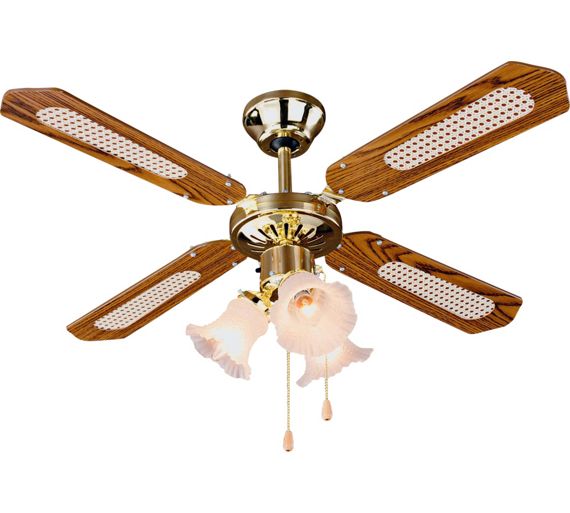 I'm really trying to establish here whether such a part even exists, or how else I might be able to integrate the unit with a combination of parts.

Any help appreciated thank you.

The good news for you is that the choice of fan-speed and lighting control is often independent of the actual ceiling fan itself. Most lighted ceiling fans operate using two independent circuits; the wall switch will have one hot wire that delivers power to the fan motor, and a separate hot wire that delivers power to the light fixture. (This is not counting any ground wires or neutral wires. This also may not be true for some digitally controlled fans, so you'd have to inspect the wiring in your wall switch to confirm. You should consult a qualified electrician before continuing.)

Once you've confirmed that you have two separate wires leading from your wall switch to control your fan and lights, you can start the task of replacing your broken controller. Unfortunately, buying a light dimming switch has gotten kind of complex with the introduction of new lighting technologies.

The light fixture circuit can be controlled using a dimmer switch that is rated for the type of lamps you have. Incandescent light bulbs are very simple "resistive loads", and can be dimmed using virtually any of the common technologies. LED light bulbs are electronic circuits, and often require a special dimmer switch designed to work with LED bulbs. Low voltage halogen bulbs use a transformer to lower the voltage; to dim these requires a dimmer switch capable of controlling an "inductive load" (the transformer is an inductor.)

Most fan manufacturers recommend not using an ordinary dimmer switch, but instead state that the fan motor should be controlled by a "fan motor controller". That's because most fan motors are "inductive motors" and require a speed controller that is designed for inductive loads - the same kind of load controller that halogen lighting requires. The Qubino site says it is designed to control all kinds of loads, including low-voltage halogen lighting transformers, so their controller should work with your fan motor. (I recommend asking their support people to confirm that it would work with your model of fan.)

As a plus, if you put in a dimmer, you will have a truly variable speed fan. You won't be limited to the three speeds the manufacturer's controller provided.

UPDATE: I just (Sept 2020) purchased an Inovelli Fan & Light Switch (LZW36). It contains a wall switch with two separate buttons (one for fan, one for lighting), and an electronic fan/light controller module that is to be mounted in the ceiling at the fan. It's fully Z-wave enabled, and the wall switch nicely fits in the existing single-gang box (which I can't change due to the wall's construction.) According to reviews posted on their site, some customers are reporting success replacing existing poor quality remotes and controllers. Unfortunately, the company is brand new and I think they are selling only 120VAC products at this time.

Dimmer circuits (and by extension, any wireless lightswitch replacement) tend not to work too well with motors. It's likely that the motor speed control is achieved by switching the winding rather than modulating the applied power.

This means that you would need to use a wireless relay, or combination of relays. So you could use this LightWaveRF relay (LW825 in preference to LW821 which has a common pole for all 3 relays). You would then need to work out how to map the relay settings to button actuation, or decode 2 relays (4 states) into off/1/2/(3) as provided by the fan.

This does require a non-trivial amount of mains voltage wiring, so standard disclaimers about burning down your house and electrocuting everyone including your cat do apply...

Not the answer you're looking for? Browse other questions tagged smart-home hardware or ask your own question.

7
Z-Wave switches with 2-way switched lights?
7
Ceiling fans - Can I use a smart switch to control a dumb fan?
16
Are there any devices with open-source protocols over Wi-Fi?
8
Wireless devices for wireless control of light
6
What's the Name for a load control switch that is hidden in the ceiling?
8
What right hardware to use for Home Automation using MQTT?
9
Possible to assign a default "light" to a given Echo device?
6
Echo and Wink, how to send a TCP packet to device on local network?