I've been using the Tuya app on iPhone for a couple of months, first with a Devola heater which broke down in a month so I sent it back, now with a Mylek.
I didn't realise until I got the Mylek that the UI for Tuya is driven by the device manufacturer not Tuya itself, so the UI for the Mylek is totally different to the Devola [which worked perfectly].

The Mylek shows as online to the app, but offline to the Scene feature in Tuya, seemingly no matter what I do.

The Mylek works fine if I'm addressing it directly from its own GUI. The Mylek weekly timer (the [7] icon in the pic below), however, is an atrocious implementation, making me click one box per hour, for all 7 days, to set periods at which it should heat & to what temperature. It does actually work, though.
I decided instead to try the Scenes in Tuya itself. Set an on & off time, set a temperature [the rest I can figure out once I get this bit working].

On and working, from the Mylek GUI… 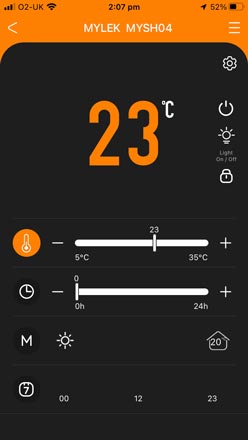 This communication works 2-way, if I change anything on the device's panel, it reflects here [so long as the child lock is off].

However, if I try to interact with the device in even the simplest way from the scheduler, it fails as 'offline' 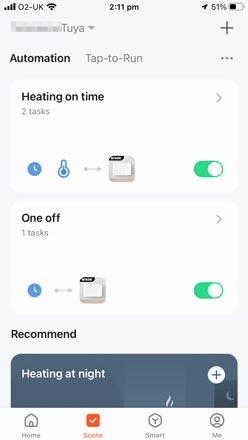 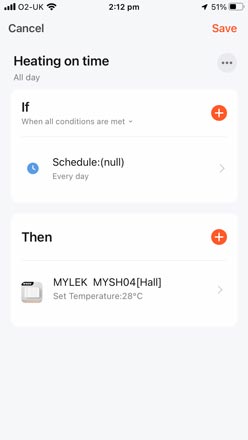 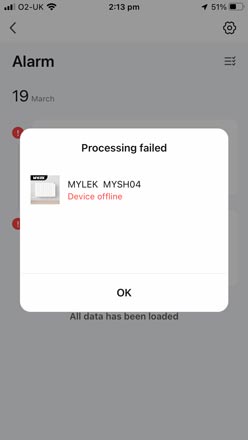 The device is quite clearly not offline. As far as I'm aware I have no firewalling at all inside this network subnet, only to the outside world.

Any ideas as to where to look next? Or anyone aware of this as a 'known issue'?
Tuya & Mylek's online help structures are both pretty obtuse & mainly written in Chinglish.

Since first writing this I have discovered, by accident, how to make 'stripes' for on/off periods in Mylek's own interface rather than having to tap in every single hour - something which had eluded me for days. I'd still prefer to be able to setup these as events instead, as they would provide finer granularity. 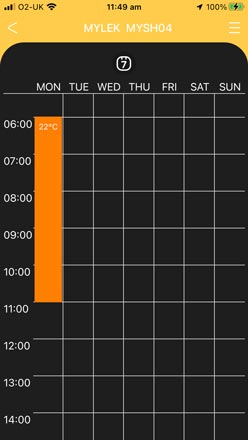 I have at least partially figured this out…

I noticed that the heater would appear offline any time my phone wasn't connected to my home Wi-Fi.

That made me suspect is was going to be a firewall issue. I have a corporate router [Sophos UTM] without UPnP, so often things that would appear to be fine actually get blocked. I'd already checked the firewall log entries & not seen anything obvious that was hitting it.

Long story short, I have now punched a hole straight through it in both directions, allowing any & all comms to & from that one MAC address.

This does indicate that the local 'direct' setting from the Mylek plugin for the app runs directly over the local subnet, but that any Tuya-specific data, such as scheduling, goes via Tuya.com & then has to be able to punch through from the outside world. This makes me think the Mylek device is not opening its own keep-alive from the inside, enabling a return message to come back down the same 'open line'.

This is not an ideal long-term solution & I shall add to this answer when I discover exactly what ports & services I need to hone this down to, so I'm not effectively running it in a DMZ.

Not the answer you're looking for? Browse other questions tagged smart-home networking or ask your own question.

7
UK-compatible (240VAC) receiver/controller for ceiling fan with dimmable lights
14
Is Bluetooth 3.0 suitable for a single-master multiple-slave network?
6
IFTTT: Use trigger from one applet with ingredient from another applet?
4
Efficient Server- and Protocol structure for raspberry, smartphone and 3rd-party-device network
3
How to pair the Xiaomi Smartmi Electric Heater 1S with the Mi Home app through WiFi
3
Samsung SmartThings washer and dryer unable to connect to the app