L'Oreal have launched a Wi-Fi enabled hairbrush, which is an IoT device. 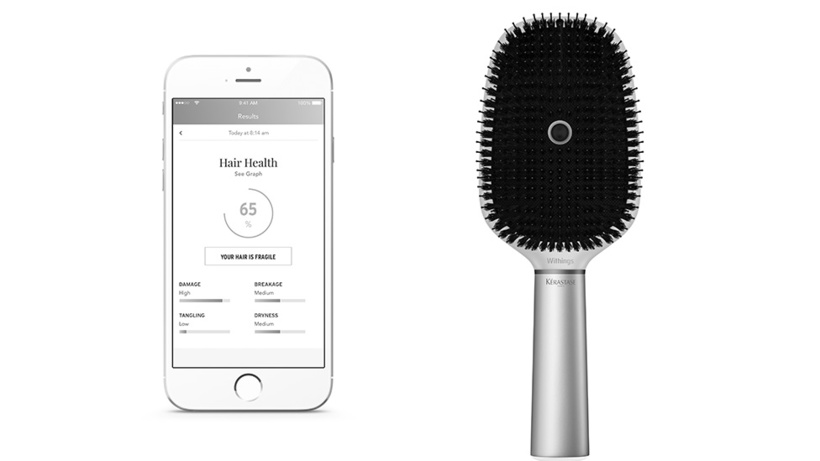 I am wondering how I can repurpose it.

I am looking for serious suggestions as to how I could modify it, or connect it to other IoT devices, like Alexa or Raspberry Pi, or services (including IFTTT and MQTT).

What extreme or Rube Goldberg use can I put it to?

For those into hardware mods (all hail, Bunny Huang) that the brush contains the following:

(hmmm, very surprisingly, we do not have a hairbrush tag yet. Is it needed? It probably soon will be)

[Update] I will offer a bonus to anyone who can modify it to mine BitCoin :-)

My first thought is that when I am getting ready to go somewhere on business, I can say "Alexa, when I have finished brushing my hair, please find me an apartment in Timbuktu using AirBnB, then book me a flight and an Uber ride to the airport and arrange for a drone to deliver the tickets to me wherever I am by tracking the location of my FitBit and don't forget to program my direction finding jeans to get me from Timbuktu airport to the apartment".

I am wondering how I can use the hairbrush for security while I am away. Perhaps if I leave it temptingly before a well lit mirror(1) with a comfy chair before it, any burglar might be tempted to brush his hair(2) and the brush could notify me?

Maybe I could IFTTT it to the security camera and the alarm system (or my Samsung TV ;-)?

At first glance, I was expecting the brush itself to be powered by a motor, which would have provided lots of scope for reusing the device. Disappointingly, this doesn't seem to be the case - the hairbrush still requires you to manually brush your hair, but it does have an awful lot of sensors to take advantage of:

The Kérastase Hair Coach Powered by Withings minimizes these risks, taking advantage of multiple sensors that provide information on the quality of hair and brushing patterns. These include:

(from the Press Release you linked)

With this information, I think there's a lot of choice for what to use the brush for. New Statesman has a rather nefarious idea for what could be done:

Munro hasn’t yet looked at the Hair Coach, but he speculates about the security of any IoT device with a microphone and internet connection. “Listening to hair breakage requires a microphone, so can it hear more than just breaks? It’s clearly very sensitive, so could it detect human voice and potentially become a spy bug?”

You could, in theory, take advantage of the hair brush's microphone to act as a sound detector (perhaps for security?), although I doubt the microphone is particularly sensitive - its original purpose only requires it to pick up sounds within a 10 or 20 centimetre radius.

Even so, if you put the brush in a key location, the microphone could perhaps detect someone walking past, and you could write some software to push a notification to your phone and inform you.

It's hard to know exactly how (or if) this could be done without more information on the product, which we can't know until it's released, but I'm sure if you were inventive enough, you could overwrite whatever code they have installed (unless the device only contains read-only memory, which is a strong possibility).

Use the mic and accelerometer to detect when it's being used to spank someone and have it call the phone with messages about child abuse, spouse abuse, hairbrush abuse, etc.