How to turn on Xbox One from Windows 10 PC using Cortana?

I am interested in how can someone turn on their Xbox One by using Cortana voice command. Unfortunately when I was searching in the topic I only found articles about how to turn on Cortana on the Xbox itself. In my case Cortana should listen on my PC running Windows 10.

If possible I want to avoid serious scripting and such for first and I hope that there is a more sophisticated solution, if only because all of these are Microsoft products.

Wake-on-LAN is relatively new for the Xbox One. This feature was released with the August update.

Luckily, you don't have to script yourself a solution. Others have already done the work for you:

If you're interested in figuring out something for yourself, this technet article is a must-read.

I must admit, I'm a little disappointed I couldn't find a completely integrated method of communicating with your Xbox One from a PC or phone with Windows 10. Both PC and Windows phone have an Xbox app after all.

'Teaching' Cortana to recognize and execute custom scripts has been explained in this Stack Overflow answer.

Notice: I only tested this on my Xbox One connected by LAN, Xbox One configured in high energy mode and with the Windows 10 Xbox app version 38.38.14002.00000. Comments if this works on WiFi and on low energy settings are welcome.

A screenshot (in dutch) of what this looks like: 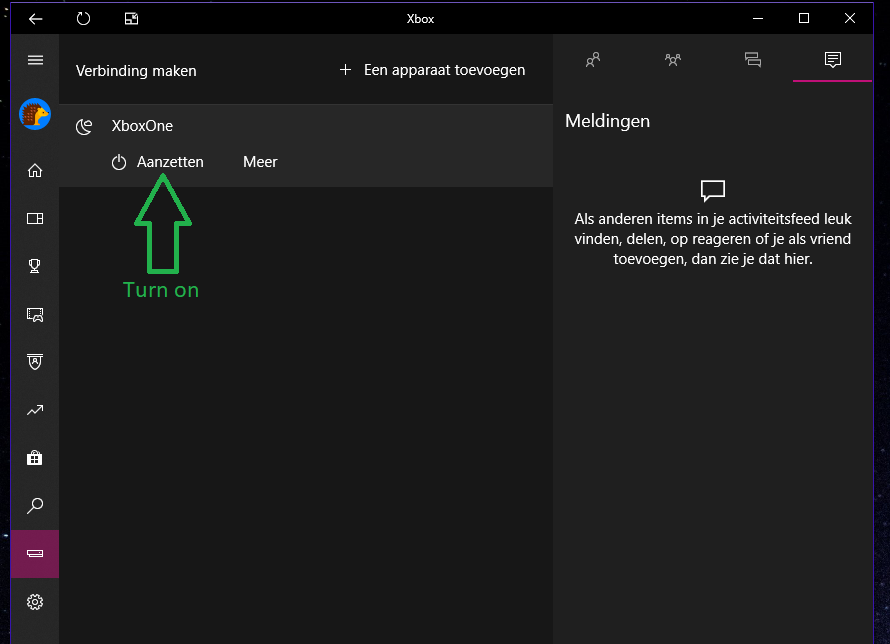 I don't think Cortana supports waking your xbox by using your voice nativly so you need a 3th party script or app. The script or app should use the wake-on-lan protocol and target your xbox one MAC adres to wake it. This guy has a video about cortana waking his pc, it should also work with your xbox one.

Another option might want to look into is using IFTT with the Cortana integration and some other wake-on-lan integration. This is an example to wake your xbox one by using Google Assistant. You might create your own working applet without any scripting at all.

For reference here is some C# Universal Windows Platform (UWP) code that I wrote to wake up an Xbox One:

(GitHub Gist link of the above code)

I have developed a (paid) app called XBoot One that you can use it to turn on your Xbox remotely both in Android and Windows. It's not integrated with Cortana yet but it will be in future releases.

It will be in Microsoft Store soon.

Not the answer you're looking for? Browse other questions tagged microsoft-windows wake-on-lan microsoft-xbox cortana or ask your own question.