Why do most smart assistants offer little, if any, customisation of the wake word?

The majority of smart assistant brands, such as the Amazon Echo and Google Home, offer very little in the way of customisation for the wake word (the phrase you use to wake up the device so it listens to you).

For example, Alexa only offers three choices and Google Home only supports 'OK Google'. A lot of users seem to be interested in the idea of custom wake words, yet none of the major brands have added support.

Is there any technical reason for restricting wake word customisation, or is it simply a branding choice?

I've read about Google's motivation for using 'OK Google', which suggests the branding idea might be true, but it also seems that wake word recognition isn't very accurate, perhaps indicating a technical reason. Would anyone be able to clarify which factor is the main reason?

Yes there are several reasons.

This blog post explains it about the Echo and the wake word Alexa. I'll summarize a bit.

Wake word recognition is done locally and in real-time. That limits the lengths of the wake word due to obvious processing limitations. Furthermore users don't want to recite a poem to activate the smart assistant. Thus, it has to be short.

It has to work with an almost 100% accuracy when called and also not recognized with that certainty when not called for. That makes problems and also makes for a minimum length for wake words. Amazon's choice to allow Echo is quite surprising since it's just two syllables.

If we look at the usual suspects, we have Alexa (3 syllables), Amazon (3), Echo (2), Ok Google (4), Hey Cortana (4), and Hey Siri (3). All industry giants almost agree on three being a good choice number of syllables.

Strangely enough the most wanted wake word "computer" has also three syllables and would match that requirement easily. It's also not trademarked.

As the blog—and reason—tells us, we totally want to avoid false positives. Let's have a look about how established the words Computer, Siri, Cortana and Alexa are. This is the Google book corpus from 2008. 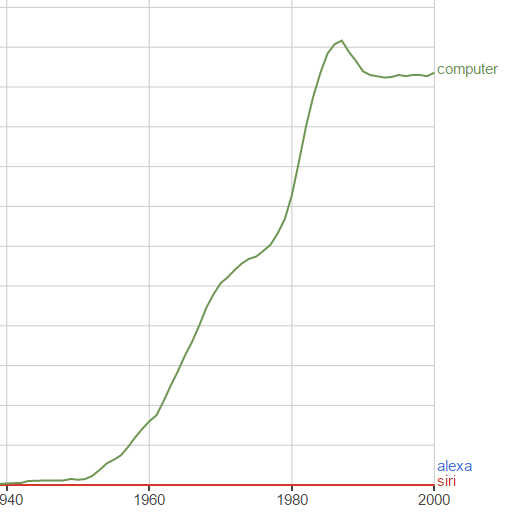 Exactly, Siri and Alexa are virtually flatlining against computer and Cortana gives an error. Not found. Makes sense since the corpus is from 2008. To give us some more perspective why computer is a terrible wake word another graph. 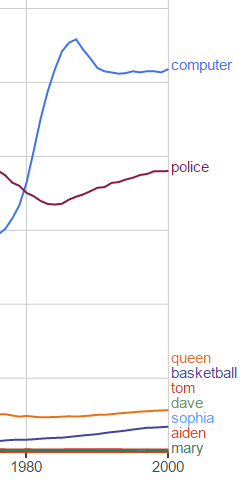 This Ngram shows the two most popular US baby names of 2016 (for currency), as well as Tom and Dave also flatline against computer. Queen, basketball and police manage to register properly. Anyhow this gives us an idea why Computer, Earl Grey, Hot hasn't been allowed so far. People use the word computer way too often.

One more thing about false positives. Alexa rhymes with virtually nothing one would say.

Is there any technical reason for restricting wake word customization

When assistant device is not in use, the application processor (I think ARM in case of Alexa as well as Google Home) is suspended and taken to lowest possible power state. The wake word detection is left to very power efficient DSP which listens to the ambient noise/voices and runs a algorithm to decide if there is a match to the wake word. If it finds a match with good amount of confidence DSP wakes up the ARM core to get going with rest of the processing.

Now since the goal is to be power efficient the DSP in question runs the algorithm as well as stores the template pattern on the on-chip memory rather than the main on-board RAM. This allows system to even take the DDR RAM to lowest power state.

Since the DSP has a number key things to do and very little on-chip memory the Assistant wake words are limited to a few choicest ones that can be matched by the algorithm with high degree of confidence.

Not the answer you're looking for? Browse other questions tagged smart-home smart-assistants or ask your own question.

20
Is the Amazon Echo 'always listening' and sending data to the cloud?
20
How to change the Amazon Echo wake word?
11
Why does Alexa answer questions I didn't ask or prompt?

13
Use cases of the "Release Event" on a smart switch
8
KNX/IP gateways with support for KNX Web Services
7
How does the Norton Core increase the security of a "smart home"?
4
How does the Roost Smart Battery connect?
6
Can I reset breakers from my computer with the Schneider Smart Panel?
7
Do any of the existing smart thermostats have the ability to detect weather and suggest you open a window?
8
Is there any way to restrict the Google Home account privileges?
1
What the OS used by Samsung smart TV UE46ES6300S