How much power do smart sockets consume themselves?

I see a lot of Wi-Fi sockets or plugs etc, but no one ever mentions how much power they consume themselves. They are typically connected to Wi-Fi constantly, waiting for commands. Does this not take power? I know it's probably (hopefully) less than the device whose standby we are trying to reduce, but has anyone tested the power usage of smart plugs or switches?

I know there are many different types, but is there a difference in usage between low cost knockoffs and big brand smart switches?

What about those ones that use normal remote controls that are usable without Wi-Fi? Usually RF signals, also using some amount of power constantly right?

Wi-Fi outlets are at about 1.5-2 Watts of power consumption, that's the WeMo as mentioned in Jim's answer, and also a few other ones I've tried, like the TP HS110.

ZigBee outlets like the one from Samsung SmartThings should use less power due to the ZigBee protocol usage. According to their support forums, it's about 0.3W when the relay is off and 0.6W when it's on. SmartThings Community.

My own old infrared controlled outlets draw even more power than the ZigBee ones, they need about 0.7W. Anyways, that's still less then the Wi-Fi outlets.

However, you might need a hub for ZigBee devices which uses up all that saved power. Wi-Fi devices can often forgo such hubs and can be directly controlled via App or Alexa and the like. Thus, you should consider your use case. If you just want to remote control a handful you might use ZigBee/IR and a designated remote, if you want more those Wi-Fi sockets might be less power consuming after all.

To understand better the power consumption of smart plugs it's worth peeking into them. To do so let's see some smart plug reference designs.

As you can see the parts of these two different designs are quite the same.

Basically the power consumption of the plug itself is the total power consumption of these parts. The main consumers are the Wi-Fi enabled microcontrollers, the relays and I believe that the LEDs consume more than the metering parts. On the top of these comes the efficiency of the AC/DC power supply, there will be a certain amount of power loss on these elements.

All of these can vary of course but mainly these are the factors that determine the consumption of the device itself. You could calculate a worst-case consumption for TI's design to get a W value. And of course you can check parameters of certain products.

A WeMo Rep stated 1.5 Watts for their wall switch on a WeMo forum. I imagine most of these wall/socket switches will draw 1-2 watts in standby.

This video from 2015 shows an Aeotec Z-Wave Smart Dimmer measured at:

I assume these switches have a similar power usage as an outlet/socket, given their similar functionality. Outlets could be slightly lower, given no need for dimming circuitry.

The person writing this post from 2016 purports to work for "a leader in the development of Switched Mode Power Supply (SMPS) technology for over 20 years" and wrote:

Today, we can build a charger/adapter supply that has <25 mW standby consumption and >82% average efficiency over the full range of load. By the end of the year we expect to be able to do even better than that. We can build a 100W TV supply that has peak efficiency near 90% (no fan required), near-unity power factor, and about 450 mW standby consumption (needed to keep the IR sensor and related components powered up so you can turn it on). It's not unreasonable to expect to see power supplies with average efficiency >90% and near-zero standby. The whole notion that you should be unplugging things to save energy is a bit outdated.

Your comment about Wi-Fi is slightly inaccurate. While most of these technologies communicate wirelessly, most do not use 802.11a/b/g/n. Doing so does use a large power drain. I direct you to this International Energy Agency report from 2016. I've included Figure 20 from the report (page 41) below which gives a broad comparison of the technologies. 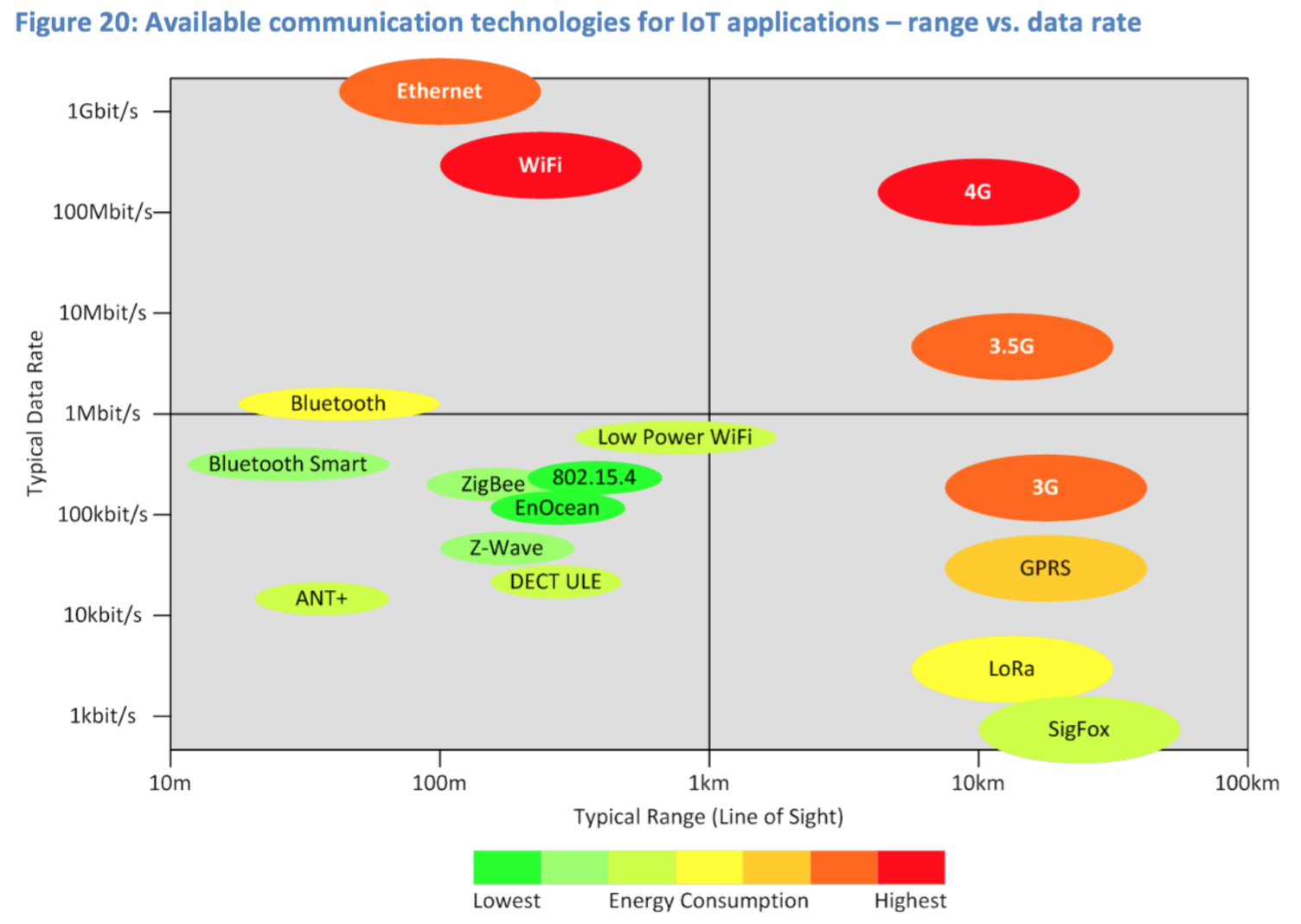 As you can see, there are wireless technologies that use far less energy than WiFi. In fact, on the subject of actuators (e.g. light switches) the report notes (page 45):

In the case of EnOcean for example, the mechanical energy of pressing the button of a wireless light switch is used for powering the communication to the gateway.

Obviously there is no mechanical action to capture energy for an outlet, but it does indicate how low-power the communication is if it can be powered by a light push of your finger.

I measured an IKEA TRADFRI control outlet (on/off) E1705 with a true-RMS multimeter. These are the results:

I measured a number of devices with an ELV Energy Master, which is known to be quite accurate.

These are the results:

The measurements were done after the devices were configured and fully booted.

When unconfigured, the TP-Link devices used more power. The AVM device was not tested unconfigured.

As you can see, power consumption also depends on the hardware version of a device.

Not the answer you're looking for? Browse other questions tagged power-consumption smart-plugs or ask your own question.

5
How relevant is the energy consumption of IoT and RF home devices?
7
Do smart sockets consume power while turned off?

9
Server to handle connections with smart sockets
3
Smart electric outlet that can cycle power automatically when power draw falls below certain wattage?
7
Do smart sockets consume power while turned off?
5
Do integrated smart plug sockets exist?
8
How can I associate an smart outlet with “lights”?
3
How do smart plugs of domotic IoT work?
2
How do smart plugs connect to Wi-Fi via mobile applications?