Stack Overflow for Teams is moving to its own domain! When the migration is complete, you will access your Teams at stackoverflowteams.com, and they will no longer appear in the left sidebar on stackoverflow.com.

Check your email for updates.

What is the best approach to partitioning IoT devices from non-IoT devices at home?

What is the best approach to partitioning IoT device in the home?

I have heard of setting up separate networks, one for IoT devices and one for everything else.

Is this approach secure enough?

Well, technically, there is no such thing as absolute security. Doing so should be technically safe enough, if we consider that your router doesn't have any vulnerabilities and can separate the network well enough. Enable "Client Isolation" (or whatever your router company calls it) if your router supports it (It may be under NAS, Firewall or Wireless menus): 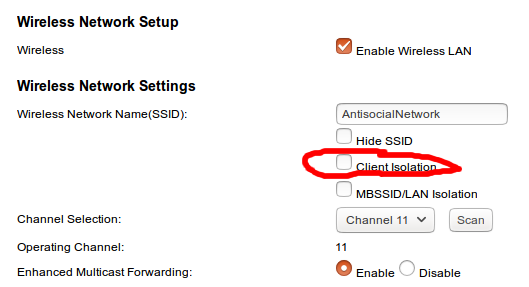 Are IoT devices a major security risk to have on the same network as my PC?

Kinda. While I haven't read of such an attack yet, IoT devices can technically be used to sniff the Internet communications or to make use of vulnerabilities on your operating system or the software you have installed to take it over. This can be a bigger risk if your PC has SSH or Telnet port open, and especially if it uses an insecure password. This was actually abused by the Mirai botnet: It attacked telnet ports of devices and tested common passwords to try to take over the device, to include it in the botnet. But this requires a vulnerability in both the IoT device and your computer, so it's unlikely to happen.

10
Should I build isolated networks for IoT devices vs. regular computers?

28
How can I check if my IoT devices are infected with the Mirai worm?
12
Why are mesh networks used more frequently for IoT networks?
9
Will multiple simultaneous biometric sensors create unbreakable security for devices?
7
Which D-Link IP cameras are affected by the FTC complaint, and what can I do about them?
8
Will changing my user name and password block Mirai attacks?
15
How do consumer IoT devices typically enable Internet connection?
5
How to connect 1 million devices over Layer 3 IP-protocol
3
Is static IP needed if using VPN to connect to IoT devices?
7
What network technology can host 1000s of local IoT devices?
3
How to simulate an IoT device or a network of IoT devices without hardware?